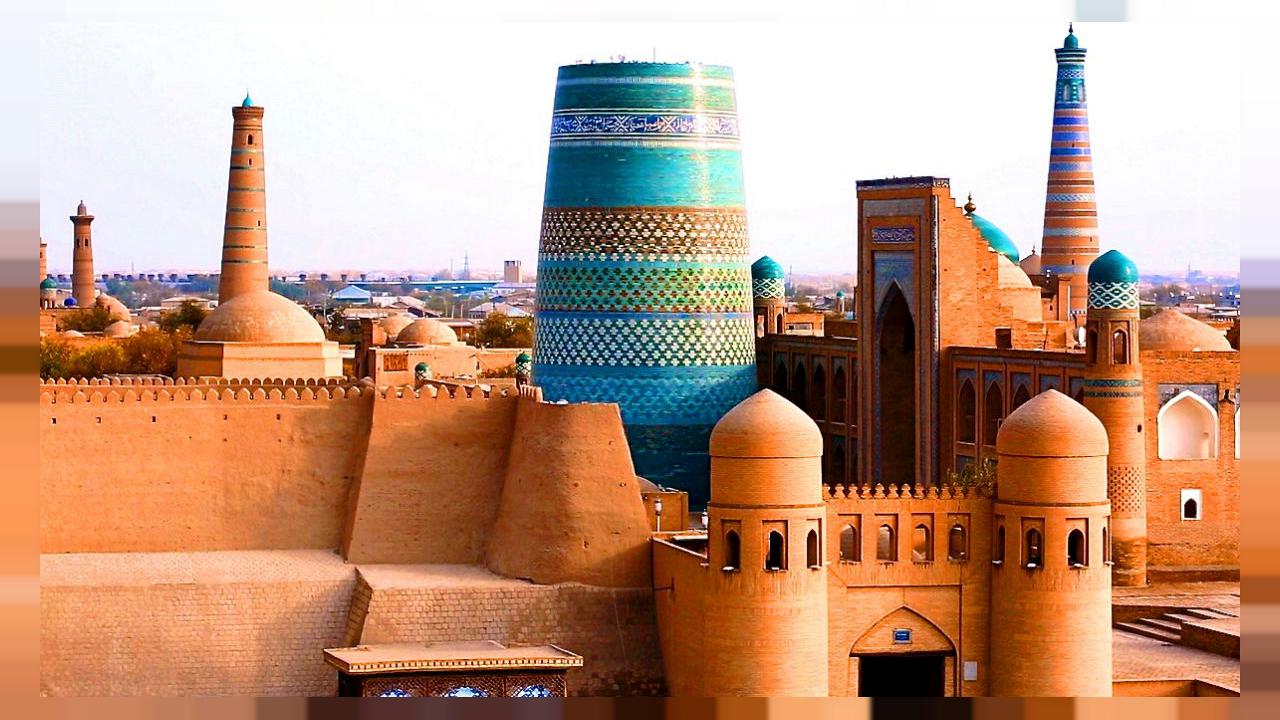 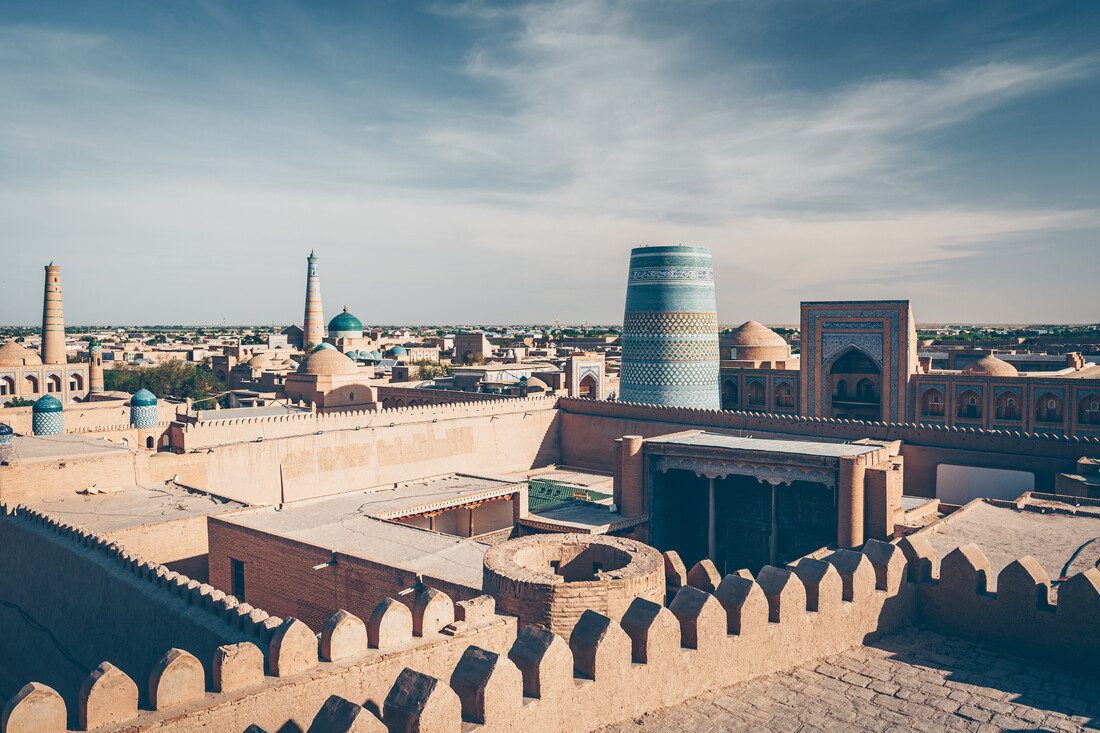 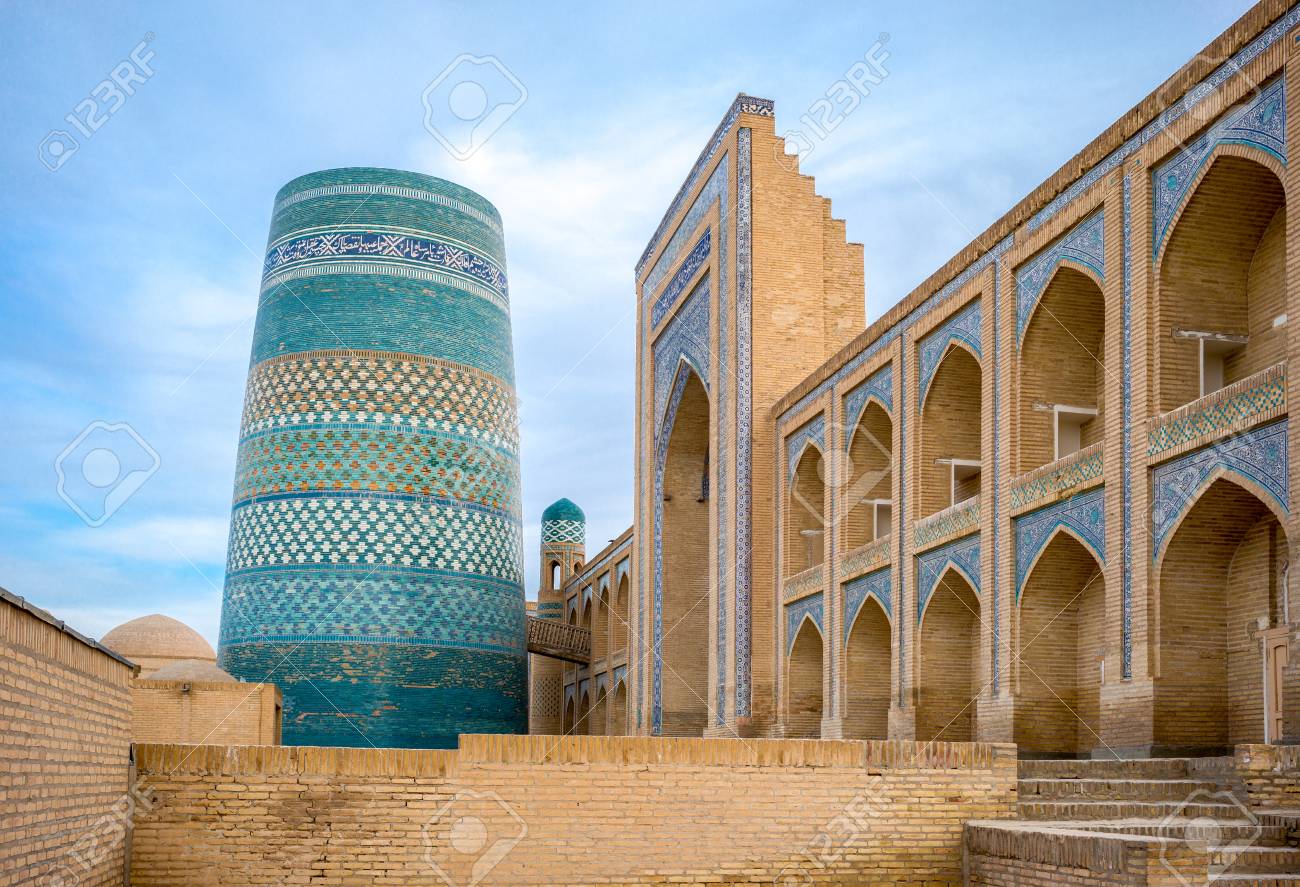 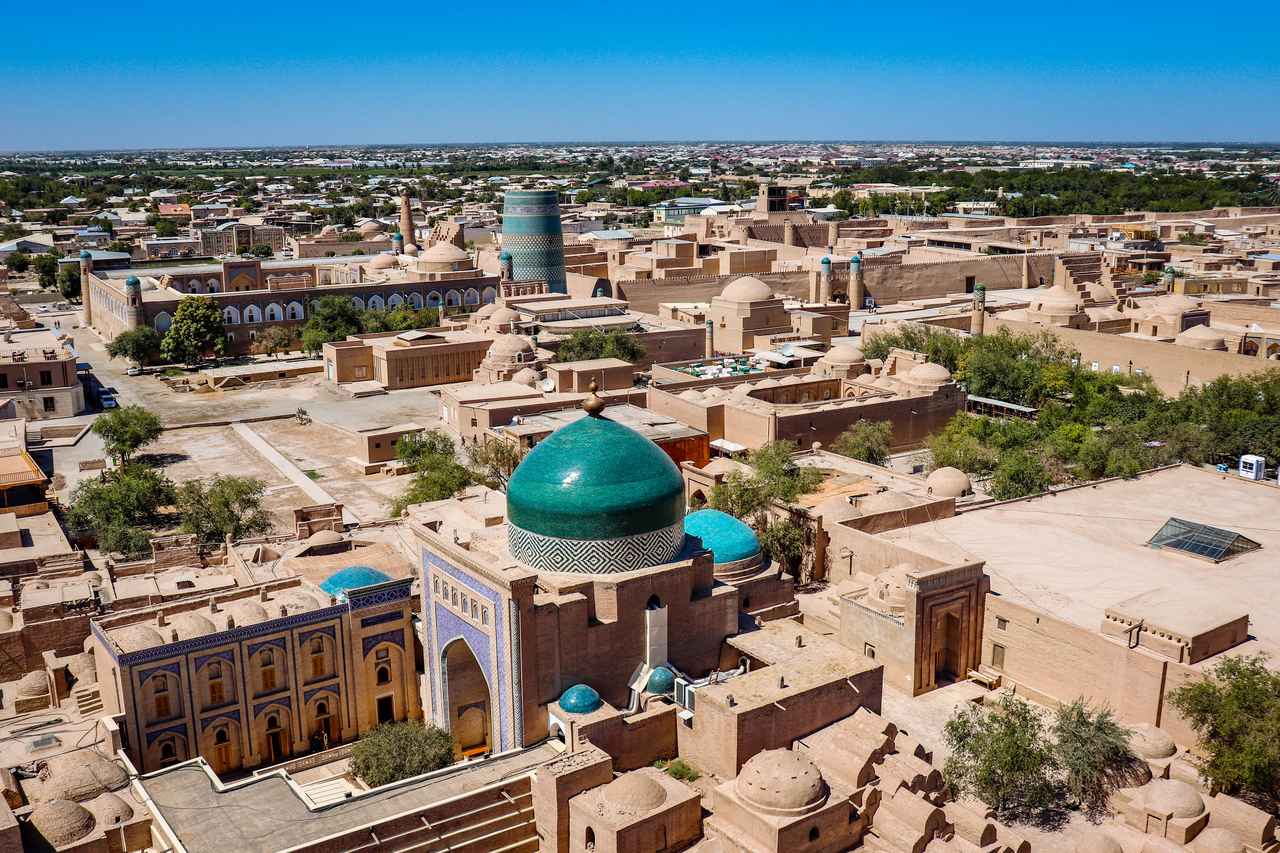 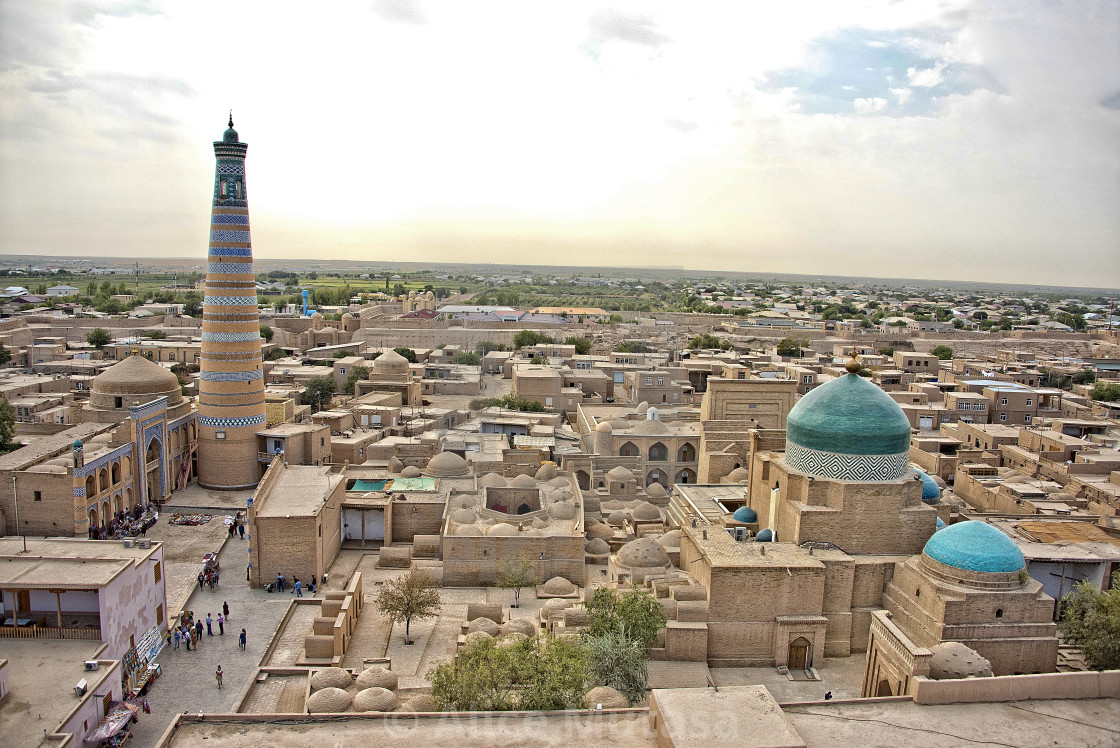 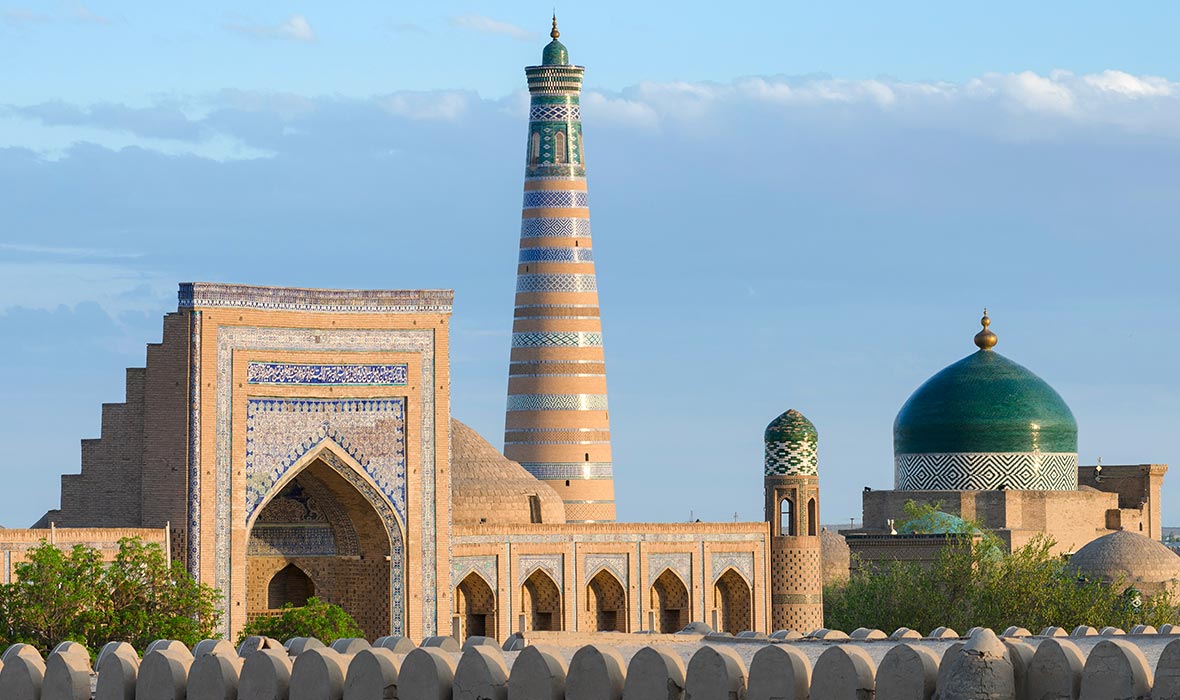 Khiva is a well-preserved and fascinating city, its azure-glazed tiles glinting in the midday sun.

Khiva is unique because it has very well preserved neighborhoods, beautiful buildings and religious, military and palace structures, in addition to houses of a specific national type. Ichan-Kala and Dishan-Kala, the two parts of the city, contain most of its wonderful monuments.

Ichan Kala is positioned within the redoubtable city walls, with history of scholarship and study. Typified by the astounding madrassas and mosques, and their intricate majolica patterns, it is waiting to be discovered.

Dishan-Kala consists of houses of traders, craftsmen and also has several mosques and a madrassah. It was divided into residential quarters inhabited by people of one and the same profession which was reflected in the names of such quarters.

Itchan Kala in Khiva was the first site in Uzbekistan to be inscribed in the World Heritage List of UNESCO in 1991.

Further to the north west from khiva lays Nukus. It is the capital of Karakalpakstan, the autonomous Republic of Uzbekistan. Every year thousands of travellers make it to Nucus to see one of the largest collection of Russian avant-garde arts. The Museum is named after Savitskiy  has been famed as The Dessert of Forbidden Arts.

Ichan Kala was the site of the khan’s palace. High officials and clergy and rich merchants used to live here. This is why we find the most important buildings in the Ichan Kala. The ordinary people, small merchants, craftsmen and peasants lived in Dishan Kala. There were wells in Ichan Kala, whereas people had to draw drinking water from the irrigation channels in Dishan Kala. In the north western part of Ichan Kala is the well, where according to the legend the city was founded by Sem.

City Gates – The  main sights lie within the massive Ichon-Qala, which contains almost all of the ancient buildings of Khiva. There are four gates on each side of the wall; * North Gate (Baghcha Darwaza); * East Gate (Pahlwan Darwaza) It is the best preserved gate in Khiva, its passage passage is long with deep niches on both sides. In the 17th and 18th cent. it was the prison of the khanate, the niches serving as cells; * South Gate (Tosh Darwaza); * West Gate (Ota Darwaza), which is the main exit and entry point for almost all of the visitors nowadays.

Kuhna Ark –Khivan rulers commanded from this fortress-residence from as early as the 12th century up to the 17th century when the khans expanded the structure to include a mosque, a harem, and a jail. Most of the buildings date from the 17th cent. The fortress covers an area of 130 x 90 m and was enclosed by a fortification wall 9 m high.

Mohammed Rahim Khan Medrassah and Square – the medrassah is mostly dedicated to it’s namesake, the Khan Mohammed Rahim who managed to keep Khiva independent from infiltration by British and Russian forces until the late 19th century. The square was once the main square of Khivan people.

Kalta Minor – This squat minaret is an iconic symbol of Khiva, mainly because of it’s exquisite blue and green tile work and the fact that it remains unfinished. It was originally supposed to rival the Kalon Minaret in Bukhara, however the architect fled before seeing it finished, fearing he would be put to death by the khan. Kalta Minor dates from the 19th cent.

Juma Mosque – the old mosque was already mentioned by the Arab traveller Mohammed al-Magisi in the 10th cent. According to the inscriptions above the entrance the mosque was rebuilt in the 18th cent. It contains 212 ornately carved columns that support the roof, dating back to the 12th to 15th century.

Pahlawan Mahmud Mausoleum – one of the most popular places of pilgrimage in Uzbekistan. Pahlawan Mahmud (“the strong man”) was famous for his extraordinary bravery, physical strength as well as his good nature. He was a furrier, but also a wrestler, doctor, poet and saint. The people gave him the title “Pahlavan”, meaning brave and handsome hero, as he defended the poor and is said to have had mystical powers. It was erected in the 18th cent. In the 19th cent. the mausoleum became a necopolis of the princes of the Kungrat dynasty. It is considered as the last great mausoleum building in Central Asia.

Islam Khoja Minaret – 45 m high minaret. built in 1908.  However using the same methods as the much older minarets at Bukhara, Wabkent and Konye Urgench. You can see the minaret from every place in Khiva and even from far away in the desert. It is probable that the minaret served military purposes as well. Islam Khoja was great vizier of Khan Asfendijar. He undertook moderate reforms, opened the first secular school and the first hospital and introduced mail and railways. Khan Asfendijar ruled from 1910 to 1920.

Shirgiz Khan Medressa – the oldest Quran school in Khiva. It was bilit in 1718/19. Tradition says that it was constructed by slaves captured by Shigaziz Khan during his expedition to Meshed from which he returned with five thousand slaves. He promised them to be released when the medressa was completed, but he delayed the completion again and again, asking new services from the hungry slaves again and again. In 1726 the slaves killed him in the unfinished medressa.

Medressa Muhammed Amin Khan – the largest medresse in Khiva. Its facade is made of coloured brick and mosaics. The main characteristics of the buliding are the hujiras (students’ cells). Khan Muhammed Amin was one of the most important khans of Khiva. The medressa was built in 1851/52 and the khan died 1855 in a battle against the Turkmen. The Hungarian traveller Vambery reported that the medressa had 250 pupils.

Tash Havli – the beautiful Tash Havli palace was built by the Khan of Khiva in the 1830s as his main residence. He and his four official wives each had separate quarters in the pillared chambers on the left. Relatives and concubines stayed in other rooms to the right.

We can organize the following events in the city of 1001 nights.